The day was sunny and sweltering, the Borucan weather is exactly what I thought it would be. I am sweaty and sitting on the back of the bus. María, my coworker who joined me on this 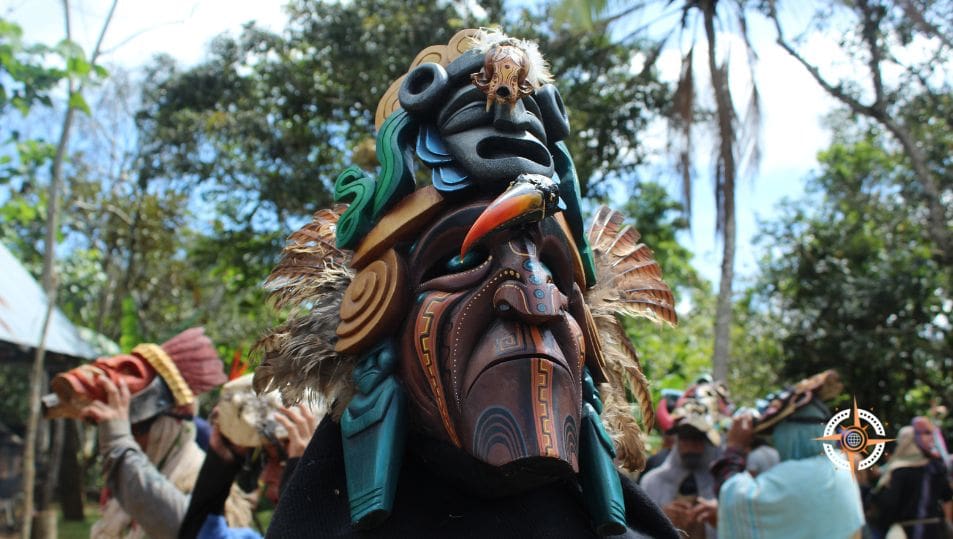 The day was sunny and sweltering, the Borucan weather is exactly what I thought it would be. I am sweaty and sitting on the back of the bus. María, my coworker who joined me on this trip, is holding on for dear life to the bus pole, as it is completely full and there are at least 7 bags on the floor where she is standing. After a 7 hour ride we have arrived to our destination, at least that’s what the pin drop on my phone says.

Outside the bus, next to the dirt road, is Jhonathan Rojas, waiting for us with a smile. You see, I had never met him in person, only saw a photo of him once, but I recognized him instantly. Behind him there is a small hut with a thatched roof, which normally holds his workshop, is now empty and only two hammocks hang from the wooden pillars.

He guides us to the small room outside the house. Inside, the paint is falling of the walls and there is graffiti everywhere. In a corner there is a bed with nothing but a bed sheet, a little table and a bookshelf, placed right next to it so we could unpack our things. I smile, thankful for the effort, Jhonathan smiles back “We certainly are not rich, but we are so happy you are here“.

In the house we are greeted by his family, conformed by his mother, two sisters and six brothers. The mother, Doña Miriam, is very quiet, cooking in the firewood stove kitchen with dirt floor, she barely smiles when we are introduced. I later learned, she had lost her husband and her brother within two weeks, and that only happened about a year ago. She really is a tough woman.

I am lost in my thoughts trying to figure out how can a single mother raise this many kids, when a delicious plate of chicharrón, rice and plantain is handed to me . I also learned all of the brothers are artisans, as that is the main source of income in the community. All their masks are carved in the tiny hut I saw earlier, and are later sold to hotels or souvenirs shops.

Now, you may be asking: Who is Jhonathan and why are we at his place? Jhonathan Rojas is a member of the Boruca indigenous community and we have been talking for over a year, the reason? I wanted to visit the Borucan community on a particular occasion, “El juego de los Diablitos“. 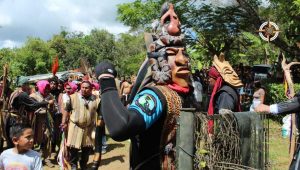 This festivity takes place once a year and lasts 4 days, from December 30th through January 2nd. All the people from Boruca, as well as outsiders, reunite to remember their history and pay honor to those who lived before them, specifically those who suffered the Spanish invasion.

“The Game of the Devils” is a representation of the fight their ancestors held against those who came to conquer their land and steal their gold, and it involves four main roles: Diablos mayores, Arreadores, Diablos rasos and Zamán.

During the first day, the morning is dedicated to preparing tamales de arroz, since the star of the show takes more time. The Borucans prepared the most important element of this celebration a week before, Chicha, an alcoholic beverage made of corn that has been fermented in a barrel, and will be shared among family and visitors for the next four days.

In the evening, those who attend this festivity will meet in another hut, big enough to fit 100 people. There, a group of musicians play cumbia, the crowd eats tamales and drinks chicha, as much as they like; and the elders give a speech to remember the purpose of the game and their motto: “Those who disobey the rules will not be allowed to attend the celebration“.

Around 11pm, the Diablos rasos will walk up to a hill, where only they can go, and wait until midnight, that’s when “the diablos are born”. After that, they will come down the hill dressed up and wearing their masks, howling and singing the whole time until they come back to the town, where the rest of the community is waiting and will follow them home to home, where they will drink chicha, dance and sing until sunrise.

The second and third day, the Zamán will appear and they will fight, and I do not say that as a metaphor. The wooden bull will be smashed against the devils who provoke him. There was blood, but then there was laughs, the Borucans know what they signed up for.

The last day is when all the diablos come out. Around 150 men have dedicated these days to carving the most intricate masks and will show them off this day. At night, the Tumbazón will start, where the diablitos will group in different areas of the town and the bull will hit them and drop them one by one, until all the diablitos “die“. Then, the bull will be hidden somewhere in the town and everyone has to look for it. Once it is found, they will set it on fire. Finally, the enemy has been defeated. Celebration starts once again, Borucans and outsiders will drink, sing and dance until sunrise… again.

And just like that, four days of community, dance and lots of chicha go by. The Diablitos died, but will come alive next year and the tradition that has existed ever since they can remember, will be preserved. 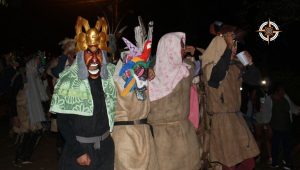 Back in San José, I find myself both relieved to be away of the lively and drunken crowd, but also longing for the community and friends that hosted me and María for the past days. After I shared my experience at the office, some of my colleagues described this festivity as an “Indigenous Frat Party”, and I can see why. During the day, local families with their children participate, but at night, the females and kids from the community mainly look from a distance. As a woman, one may feel intimidated, surrounded by men who may have had a little too much chicha.

Personally, I will not say this was a magical experience that I would repeat every year, or something I would take children to. My advise? If you wish to visit Boruca, bring some friends along, look after each other, speak to the locals, as they will make the most to make you feel at home, and do not get on the Zamán’s way if you do not wish to get hurt! This is one, if not the most representative Borucan tradition. I am honored to have been able to participate in last years game.

So, would you participate in this activity?

She serves as an Administrative Assistant at Outlier Legal. A creative, proactive and responsible professional, with an English degree from the US embassy and her skills have allowed her to work in several programs as an interpreter. She currently studies Advertising Design. 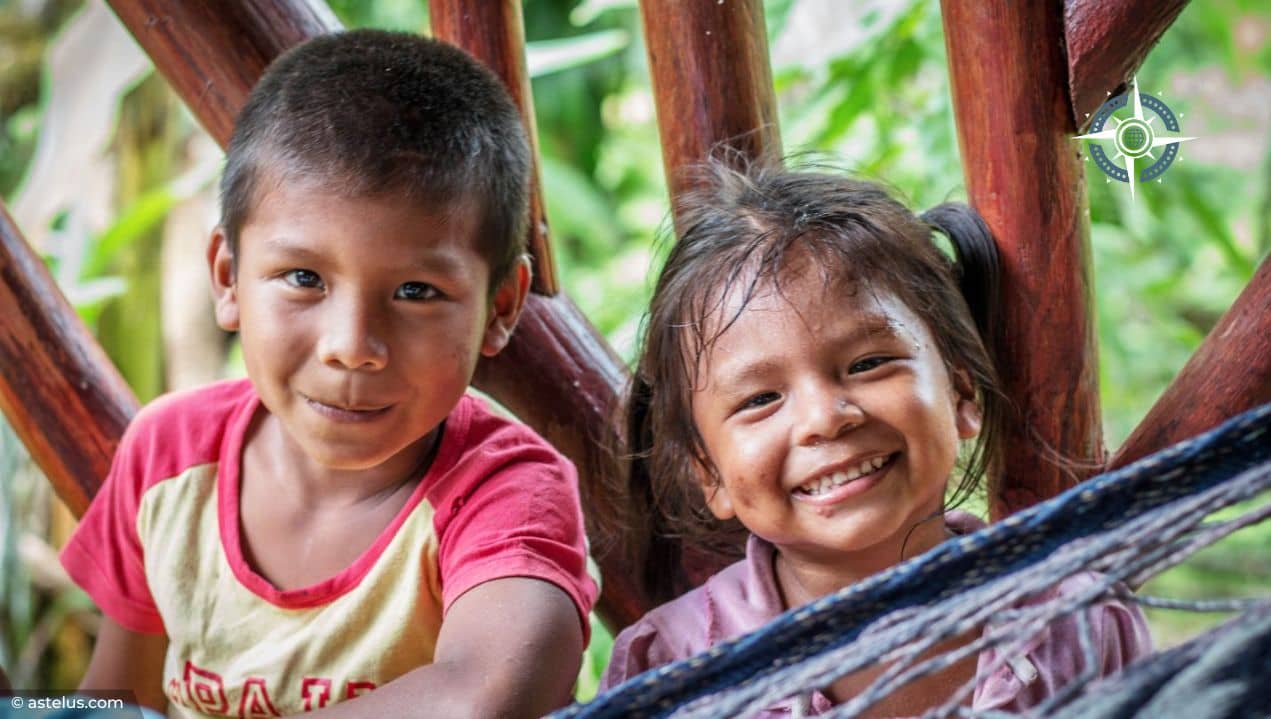 Costa Rica is an indigenous country 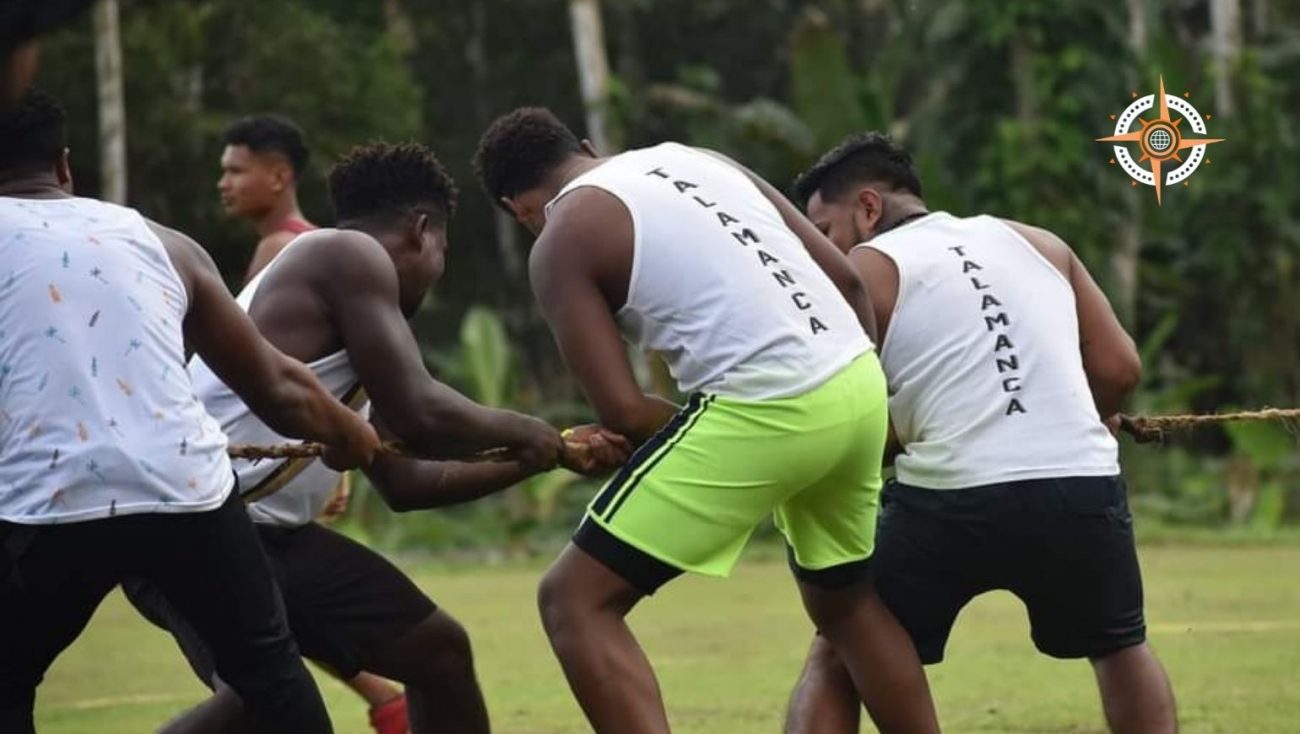